Ask the President: Do you have a question you would like to have answered by President Lunn? You’re invited to send your question, suggestion or comments directly to President Lunn at president@drlunn.ca

May 2012: Visit ICD on Facebook to view President Lunn’s photos

from recent visits to China, Japan and Korea 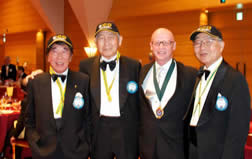 April 2012: Read a summary of the Executive Committee meeting recently held in Vancouver

November 2011: Click on President Lunn’s videos from India below